Report about current projects of NGO Blagoe delo in 2018

At the end of the year, we all usually sum up – kind of personal report to yourself. What was successful and what is not yet? What is only tinsel and what is really matters?

The development of higher education in social pedagogy, based on practical experience as a tool for social reform and the involvement of people with disabilities in Armenia, Georgia, Kyrgyzstan and Norway.

The project is aimed at supporting and developing practically oriented higher education in the areas of social pedagogy and social work of the three countries of the post-Soviet space – Armenia, Georgia and Kyrgyzstan. Within its framework, a group of scientists, practitioners, cultural workers and students from these countries with the aim of acquainting themselves with international experience and modern innovative methods of rehabilitation and social inclusion of people with disabilities.

The goal of the project is to promote public progress and the implementation of the provisions of the UN Convention on the Rights of Persons with Disabilities. 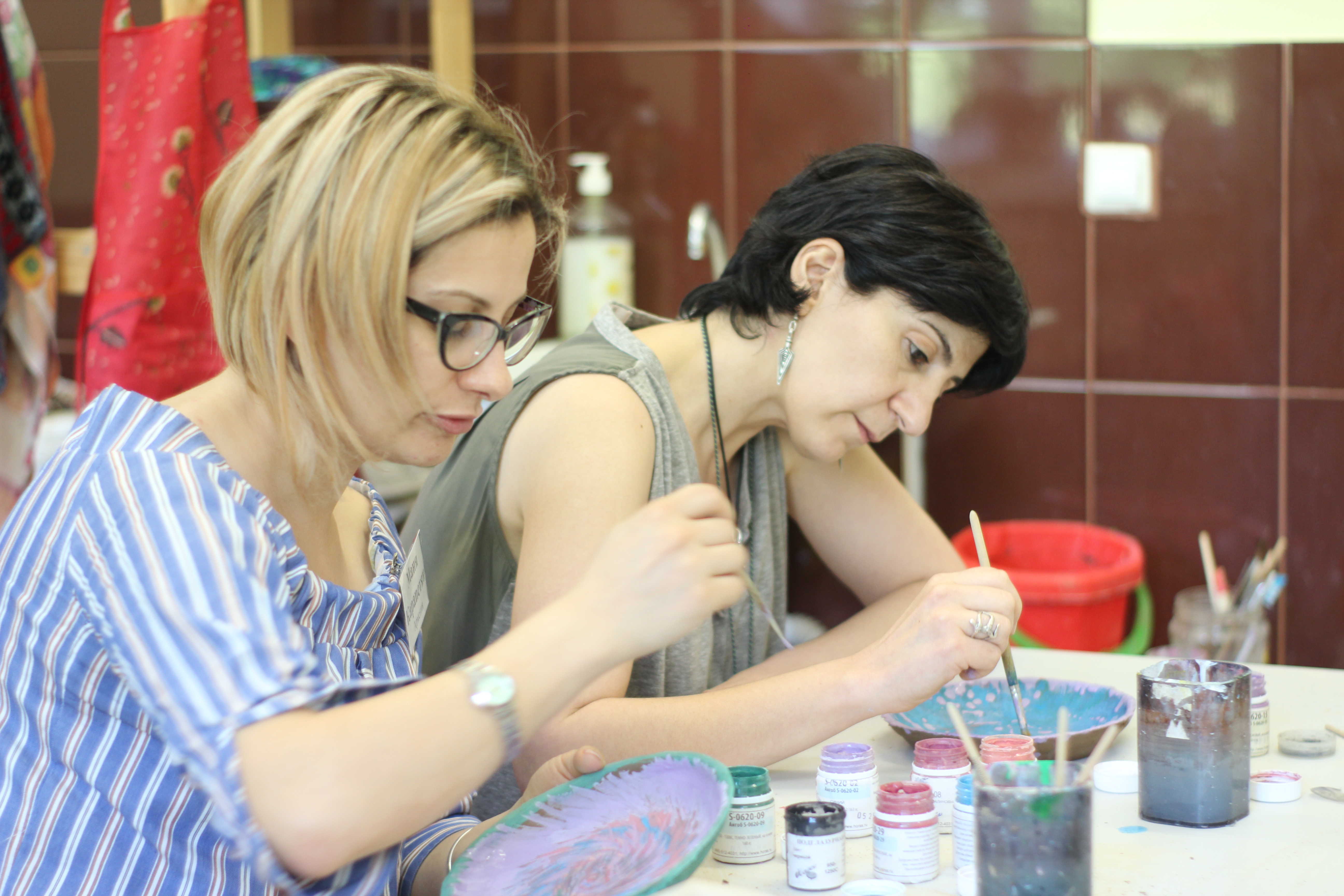 The project provides for broad interaction and close partnership between educational institutions, state and private non-profit social organizations not only in Norway, Armenia, Georgia and Kyrgyzstan, but also in Russia. As part of the project in June 2018. An international delegation of 20 people visited the village of Verkh-Neyvinsky, where, on the basis of the “Blagoe delo”, she studied practical experience and theoretical developments in the field of rehabilitation of people with disabilities, the participants got acquainted with the activities of craft workshops and listened to seminars prepared by our employees. 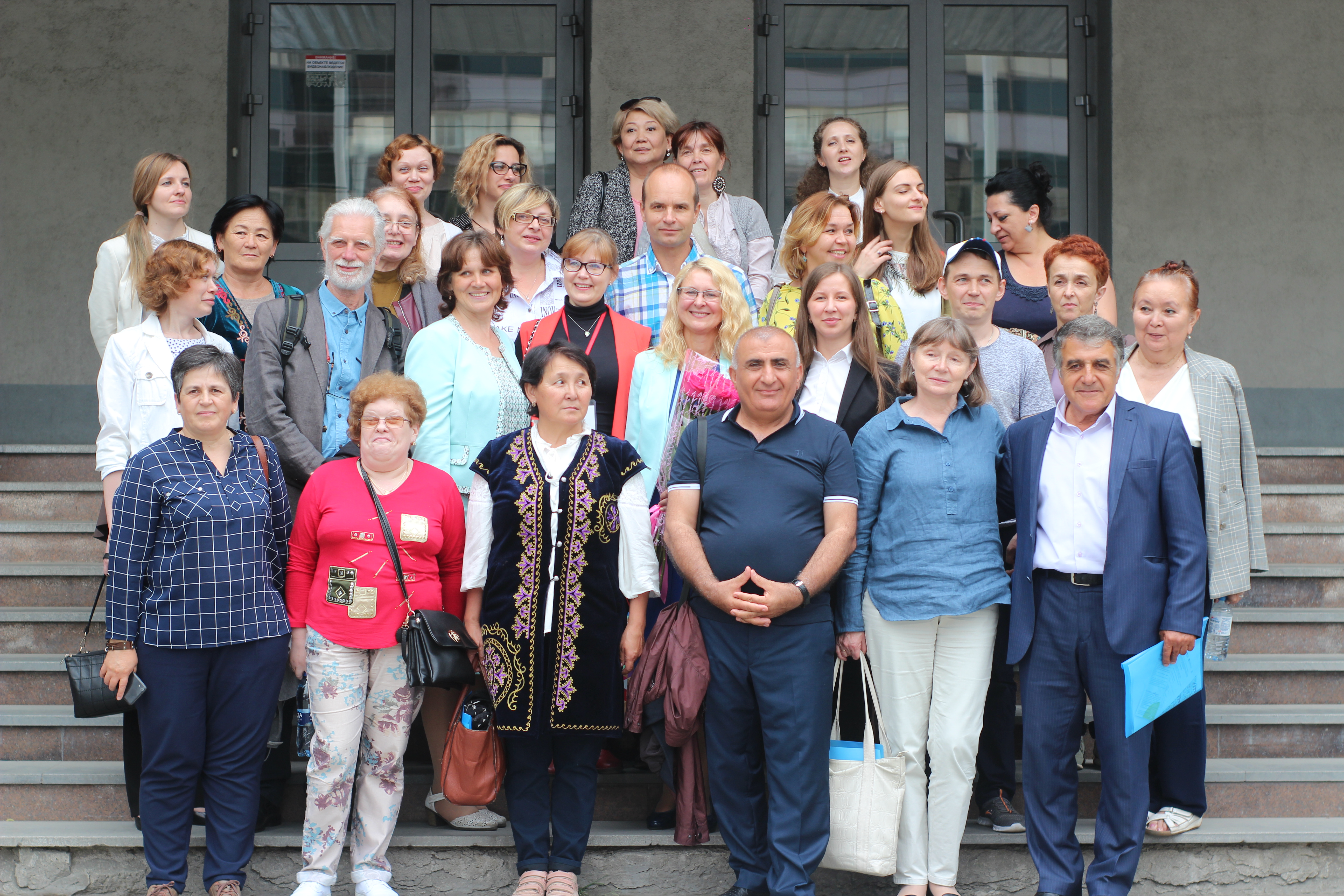 In July, an international conference was held in Kyrgyzstan, where specialists from Armenia, Georgia, Kyrgyzstan, Norway and Russia discussed the problems of higher education of students studying in social specialties.

In September, a project was organized for the project participants at the R. Steiner University, delegations from Georgia and Armenia, a representative of the Ural State Pedagogical University and the director of the NGO “Blagoe delo» Vera Simakova took part in the project. At the same time, the experience of the “Blagoe delo” was considered in the process of preparing specialists from neighboring countries as one of the basic ones.

In November 2018 Participants of the project “Building Bridges” took part in the III International Festival of Inclusive Art “Inclusive art” in Yekaterinburg, one of the co-founders of which is “Blagoe delo”.

Starting from September 1, the active phase of the new large German-Russian joint project “INKuLtur” started, aimed at increasing the inclusion of people with disabilities in the cultural life of society. Its initiator is the German organization DRA e.V. (“German-Russian Exchange”), and “Blagoe delo”, along with the Pskov public organization “Society of parents of disabled children with autism,“ I and You ”became the main partner of the project. 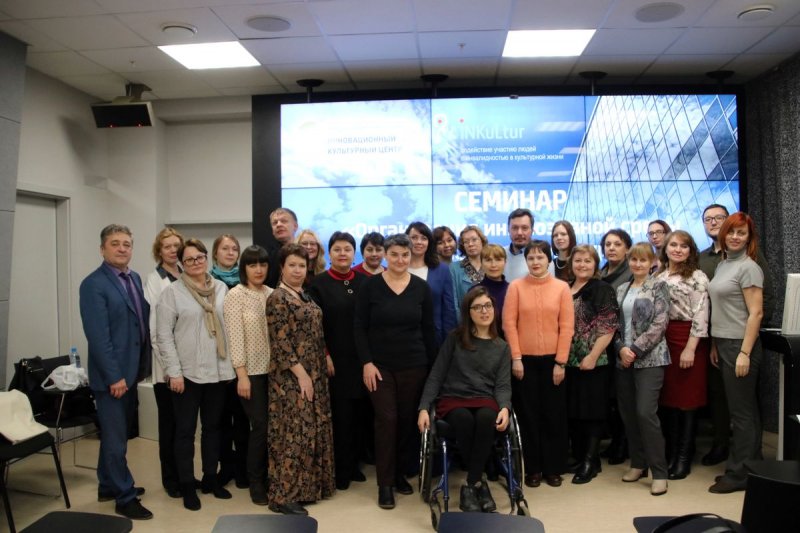 November 19 and 20, 2018 In the Sverdlovsk region, the first two seminars were held on the program of the German-Russian project “InKulture”, initiated by the German organization DRA e.V. (“German-Russian Exchange”), supported by the Ministry of Culture and the Ministry of Social Policy of the Sverdlovsk Region, and aimed at increasing the inclusion of people with disabilities in the cultural life of Russian society.

The main task set by the founders is to support the creation of a new modern barrier-free space in such cultural institutions as theaters, museums and cinemas. For this purpose, a detailed concept of such a space will be formed; discussions on this issue were held; Specialized training was organized for 160 professionals working in cultural institutions.

From November 21 to November 23, the III International Festival of Inclusive Art “Inclusive art” took place in Yekaterinburg. Organized with the direct support of the Ministry of Culture and the Ministry of Social Policy of the Sverdlovsk Region, it was intended to demonstrate the possibilities of inclusive interaction in the field of art and to give a good opportunity to express themselves to many creative people with disabilities. “Blagoe delo” initiated and one of the organizers of the event.

A total of 114 bands took part in it, consisting of 720 performers from 10 countries, including non-CIS countries. Including 52 teams performed in the final part, held in the regional Palace of folk art. As it happened before, our organization not only acted as one of the co-founders of the festival. The guys and employees of the “Blagoe delo” took an active part in the creative program of the festival and were able to demonstrate their skills and abilities in a worthy manner. 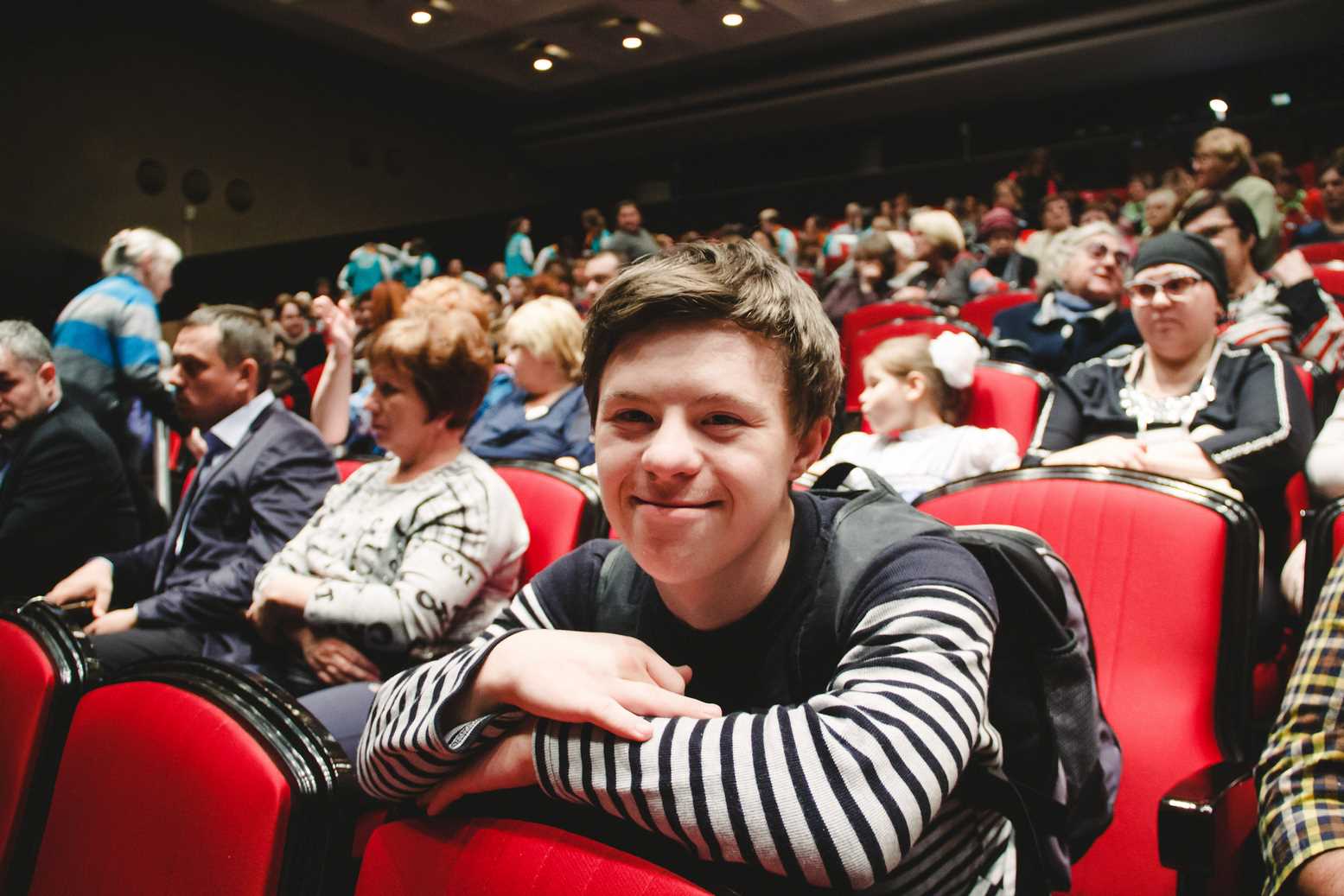 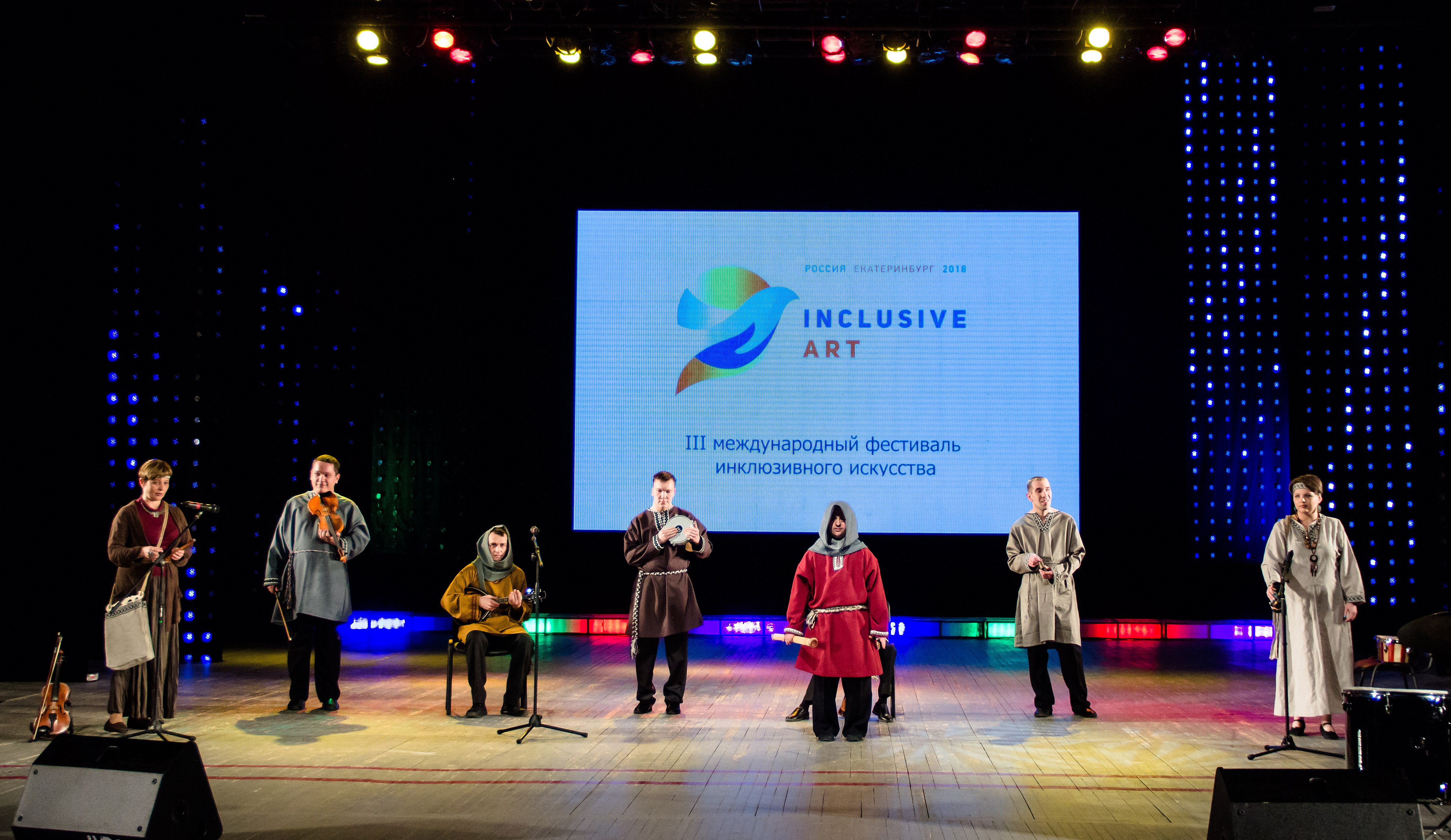 Art professionals from Russia and from abroad conducted 21 creative workshops for participants and guests of the festival. For example, a master class in dance improvisation, Mixed Styles and Opportunities, was prepared by an expert from Germany, Mechthild Kreuzer, who is wheelchair-driven, a professional dancer in the group “Mixedabled Tanzcompany”. 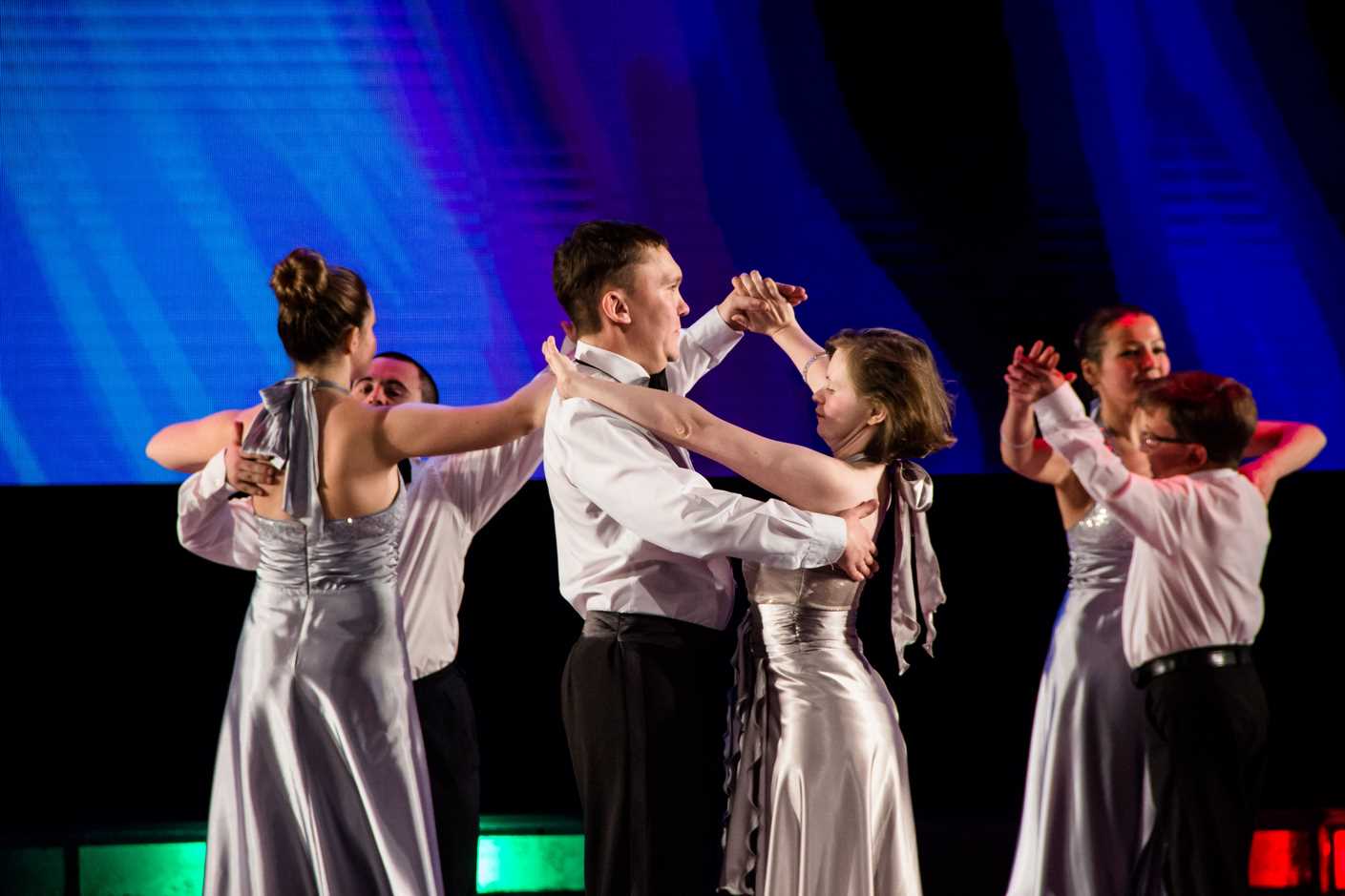 The uniqueness of this particular festival is that the participants, the leaders of the collectives and everyone who wanted could try themselves in new directions and use their skills in creative work. In the future, it is planned to hold the Festival regularly (once every 2 years) with the support of the Ministry of Social Policy of the Sverdlovsk Region.

Accompanied accommodation for people with disabilities
The direction of the project is social support, rehabilitation, adaptation of disabled people for their socialization and social integration.

The main target groups and the number of project participants:
People with disabilities, members of their families, volunteers, specialists – at least 120 people.

Since June 2018, the “Blagoe delo” has been involved in the implementation of stationary-replacement technologies – that is, the project to create a training apartment for the independent residence of people with disabilities with the support of the Novouralsk municipality and the Ministry of Social Policy of the Sverdlovsk region. 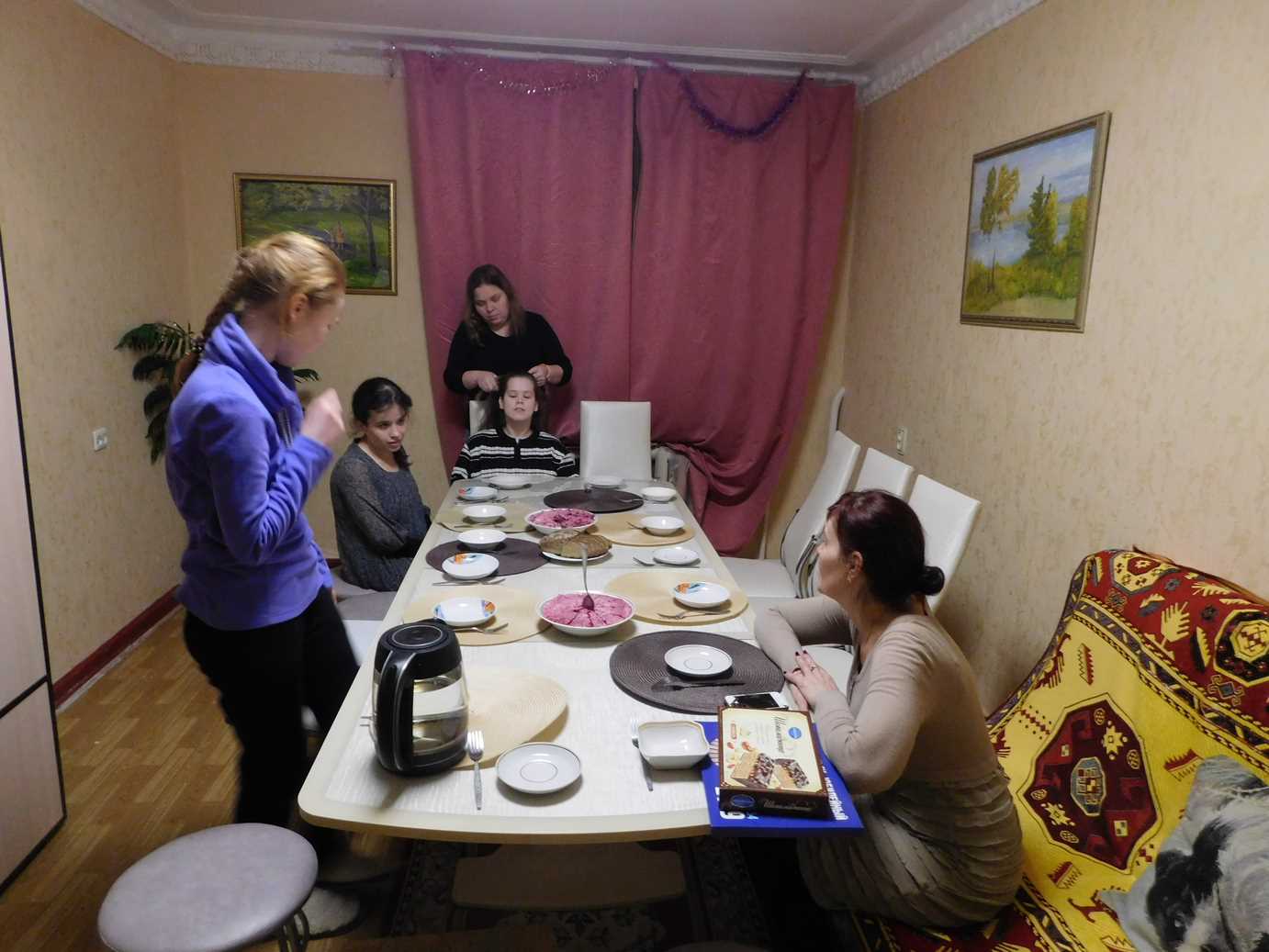 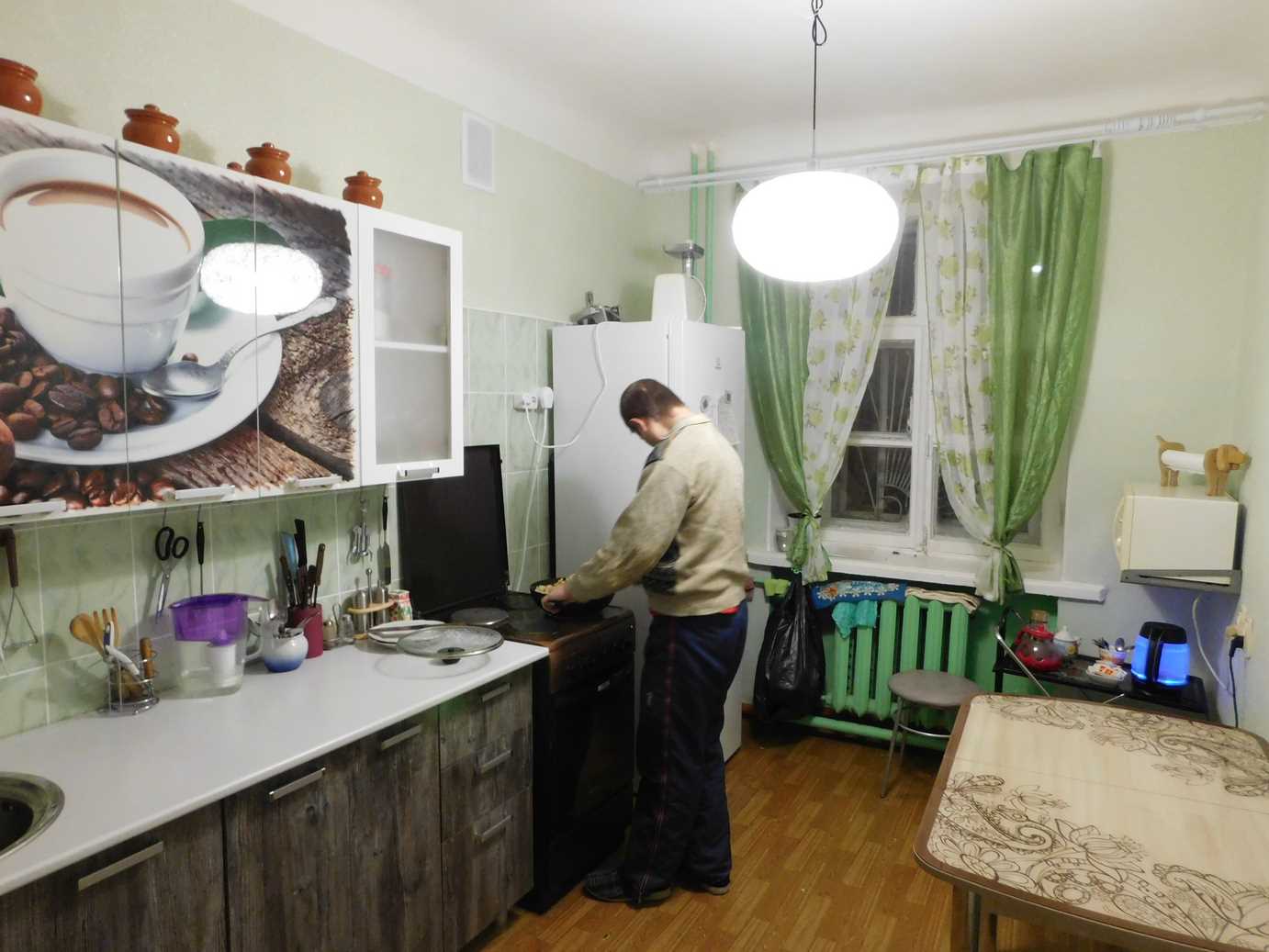 The goal of the project is the development and implementation of a model for training socially everyday skills in the conditions of accompanied living of people with disabilities, including those with severe developmental disabilities in Novouralsk.

Project tasks:
– Creating conditions for the accompanying residence of persons with disabilities, in the town of Novouralsk
– Development of the content, methods, standards for the provision of services of accompanied accommodation for people with severe developmental disorders
– Involving the public in solving socially significant problems related to the social integration of persons with disabilities
– Teaching social and communicative skills and applying them in everyday life
– Training of specialists involved in the project.

For a supported residence for people with disabilities, the “Blagoe delo” received a social rent to an apartment in the city of Novouralsk with an area of 72 m2. Food and household needs are paid by people with disabilities themselves, social services are financed by the Ministry of Social Policy, and the apartment and furniture were obtained thanks to the support of the municipality, sponsors and NGOs. 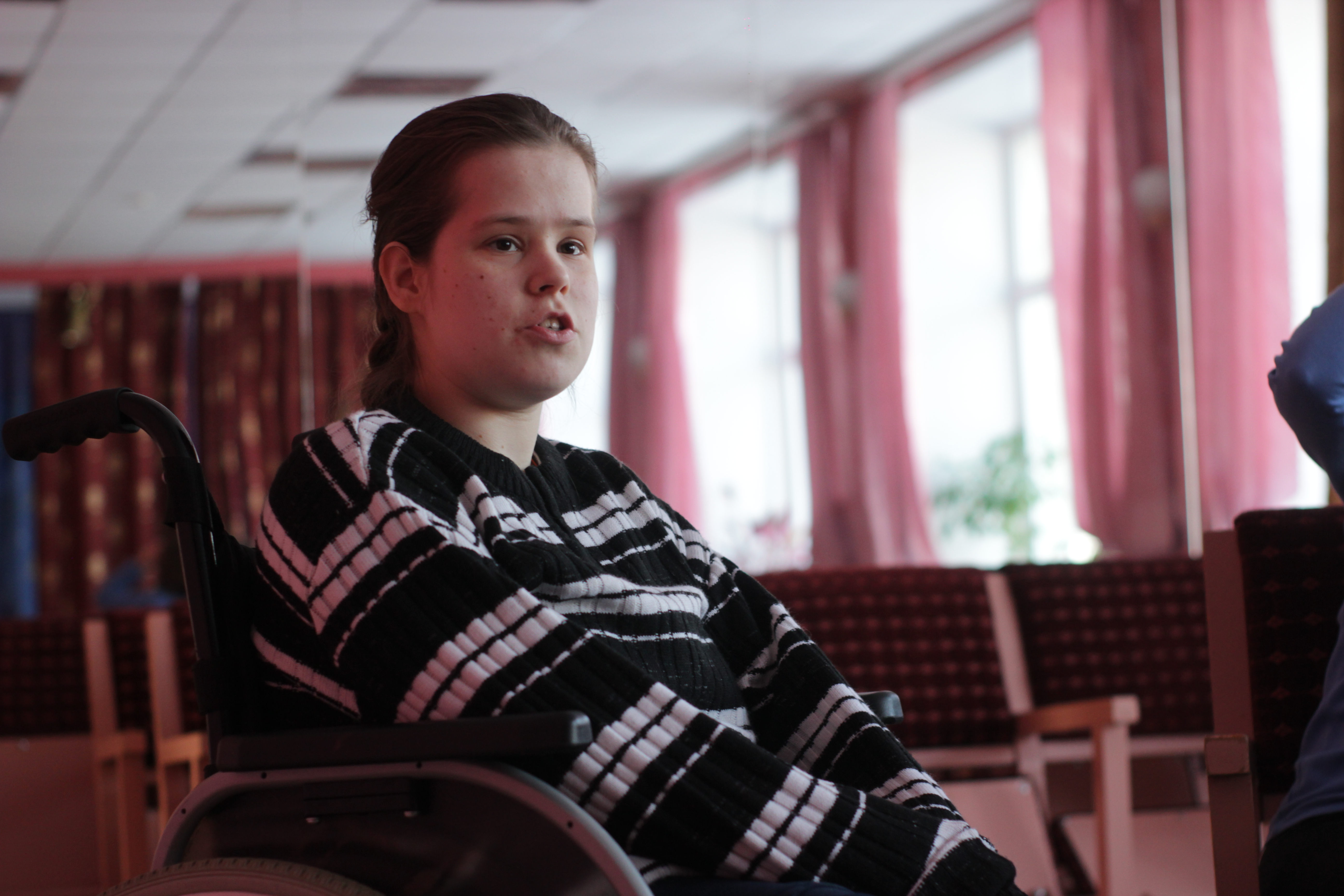 In spring, on the basis of our organization, the program of the seminar on the project “Supporting living places for persons with disabilities” was implemented, prepared jointly with the support of the Ministry of Social Policy of the Sverdlovsk Region. The teachers, who conducted the program, completed an internship this spring, personally acquainted with the experience of accompanying accommodation for people with disabilities in the cities of St. Petersburg and Pskov, and the chief consultant of the seminar was a Swedish specialist from the Mikaelgarden Institute, medical teacher Brigitta Deck.

The project “Supporting living places” for the Sverdlovsk region is pilot and is designed for 6 months. The duration of stay of each group is 2 months. Since November 2018, 6 people live here (3 young men and 3 girls with disabilities). 2 of them are graduates of specialized residential homes for children with disabilities in the Sverdlovsk region. During the project, the guys learned how to self-serve, plan a budget, go to the store, prepare food, and in the future plan to live independently.

In September 2018, ANO “Blagoe delo” took part in the All-Russian program “Start another way”, which was held with the participation of the Center for Support of Social Initiatives “Impact hub Moskow”. The program was designed for social entrepreneurs working in the field of helping people with disabilities. 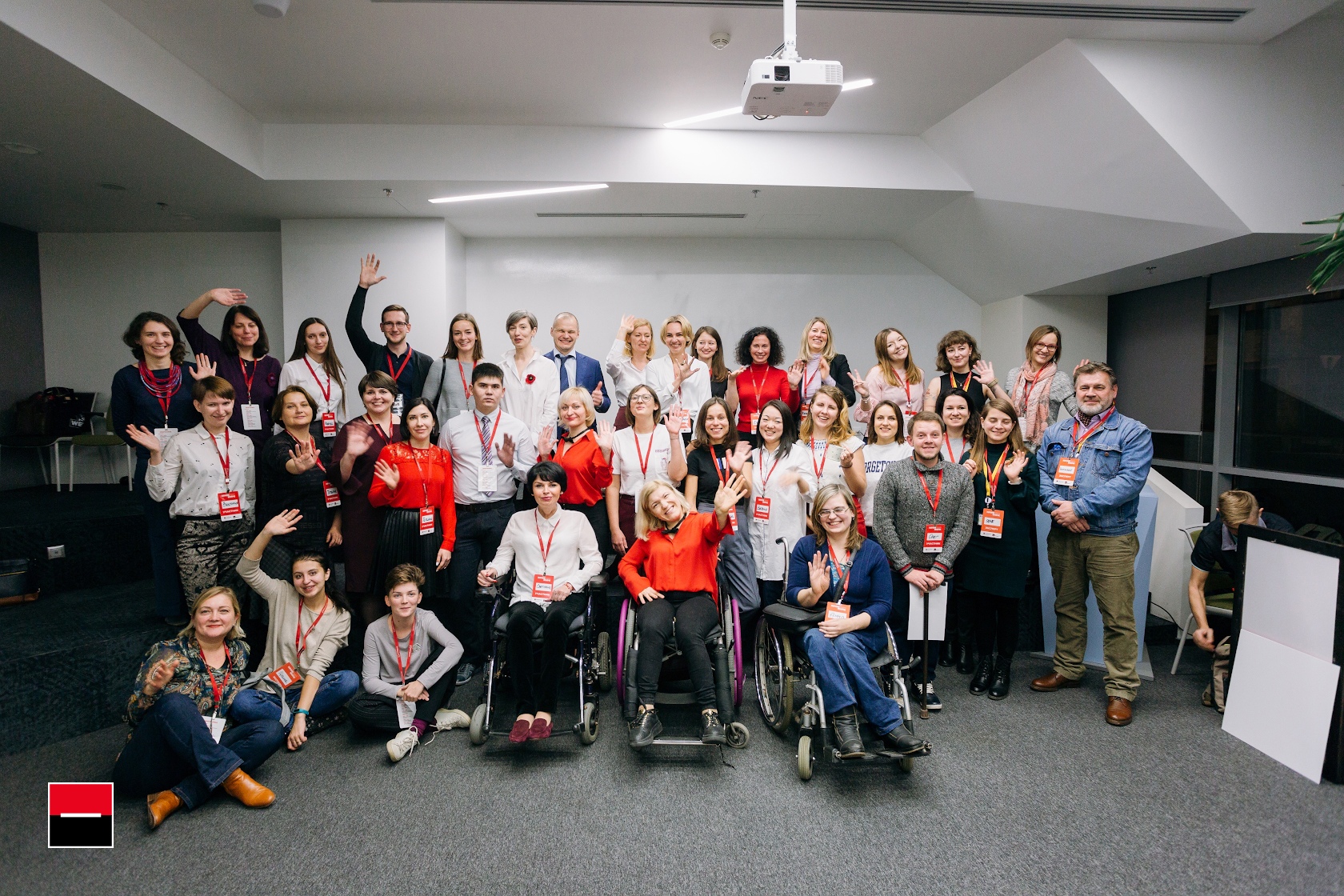 We were trained and supported by the curator, which resulted in the improvement of the marketing system and an increase in sales by more than 2 times. During the project, the following changes were made:
● product segmentation (circulation and design)
● Production planning and product range optimization.
● Work with B2B sales.
● Work with online and offline stores, commercial offer.
● New designer line of white clay souvenirs.
● New workshop with cheap products for small cities and people with low purchasing power. Printing on mugs, t-shirts, laser engraver and cards. Cheap souvenir products.

On September 1, the project “Special Designers” was launched with the grant support of the Ministry of the Sverdlovsk Region. The aim of the project is to develop the experience of employment of people with disabilities with severe mental and mental disabilities. 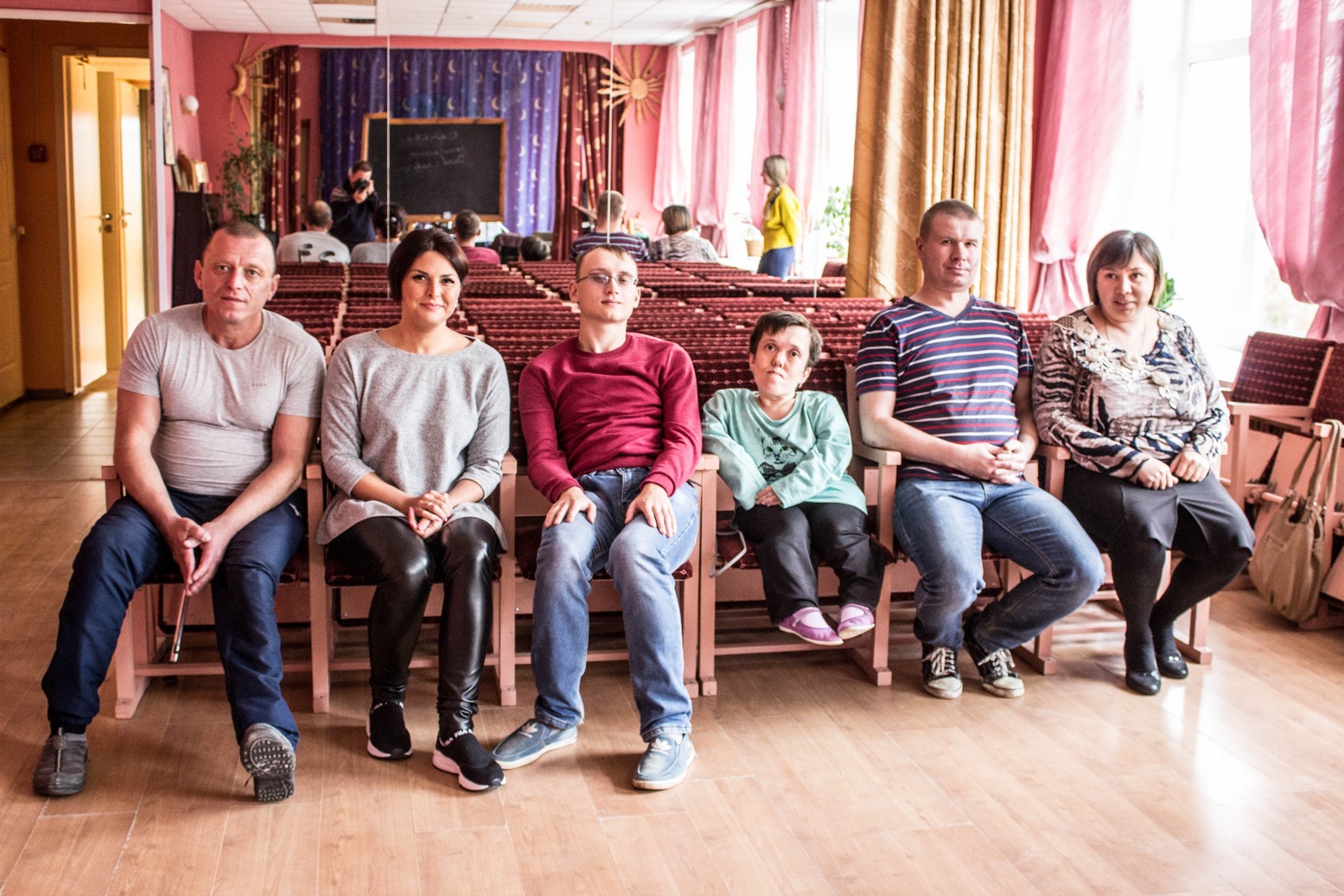 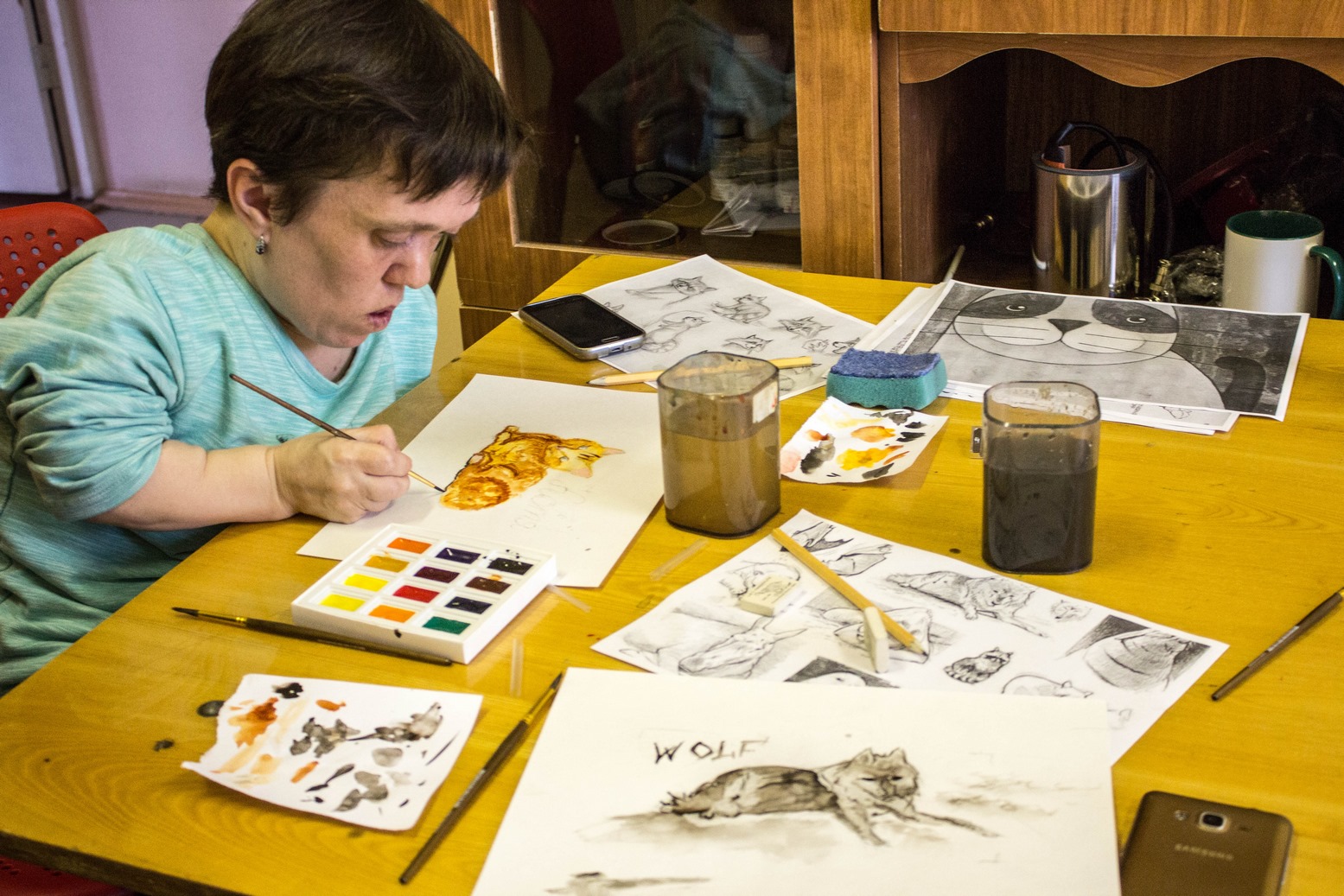 From September to November 2018, we developed 20 design sketches for thermal printing on fabric and ceramics. The guys learned to make printed souvenirs using special typographic equipment: T-shirts, mugs, postcards and badges with thermal images printed on them. Also within 3 months we conducted a series of master classes from seven classes, in which 35 people from various social organizations and institutions of the region took part. 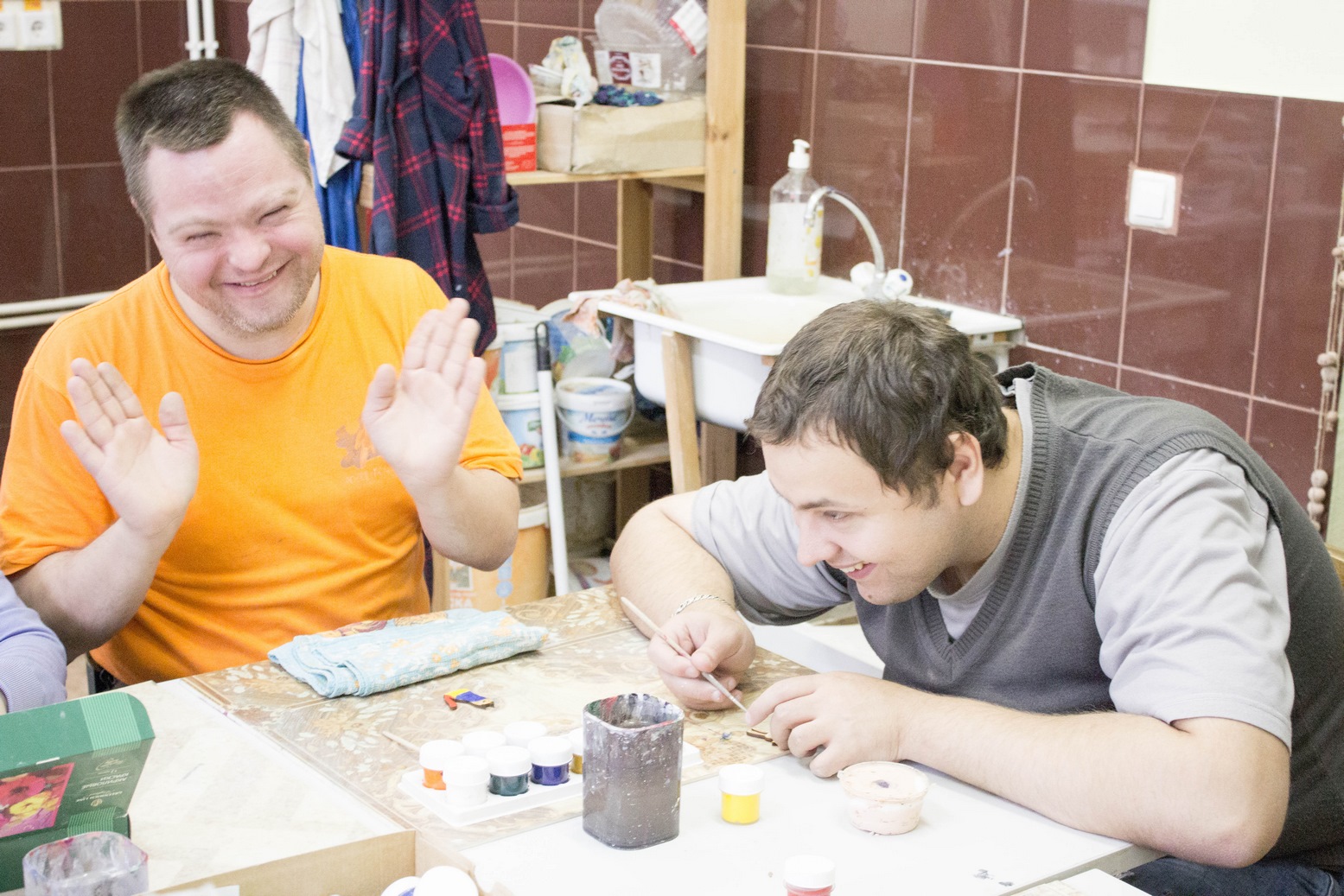 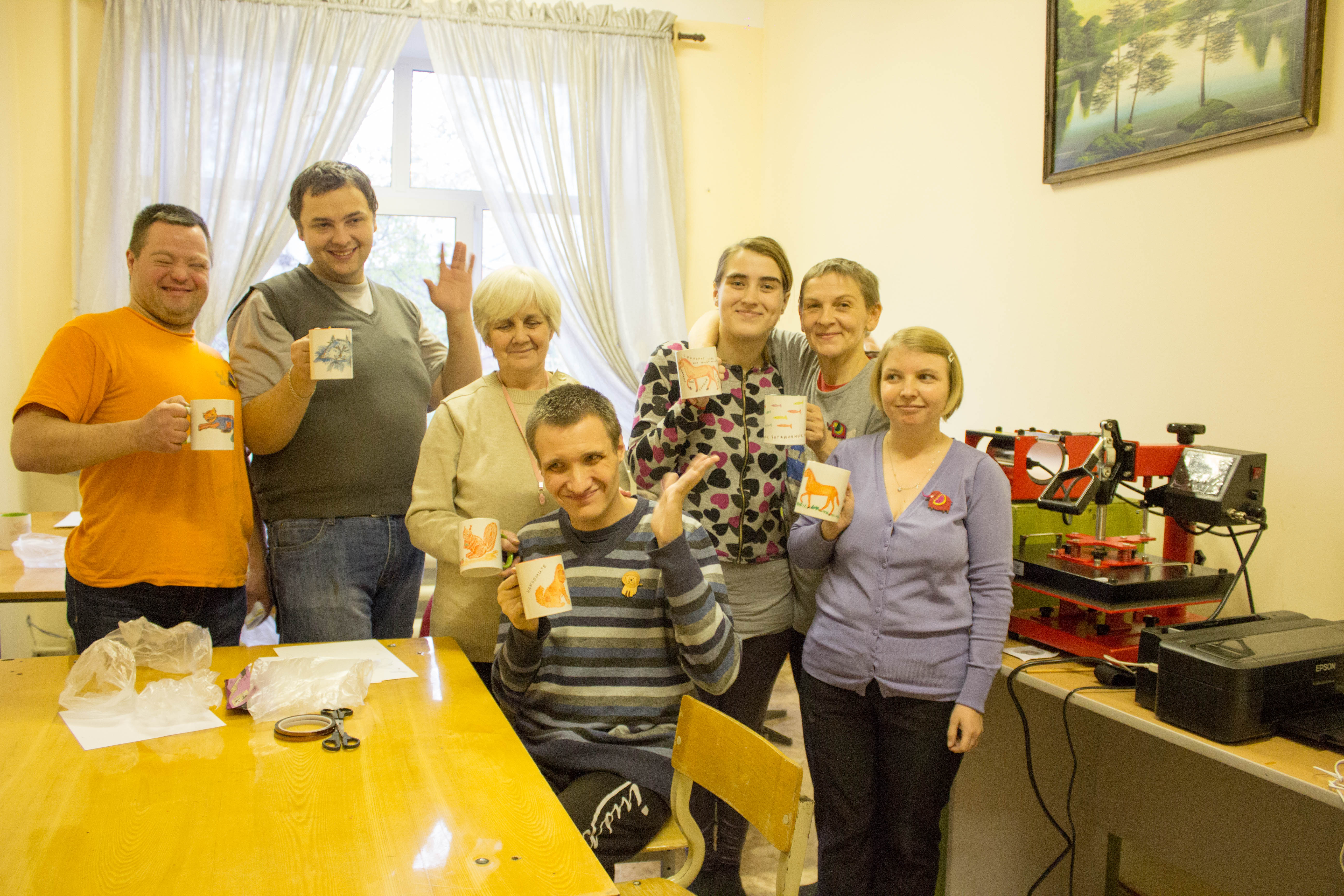 At the end of the project, another workshop was created on the basis of the “Blagoe delo” for our children, where 5 people are now officially employed. Thanks to this, our masters have mastered another specialty, and in addition, the range of products that can be offered to an interested buyer has significantly expanded.

Check out other projects

A person and a plant are one life The Aristov’s House renovation. The start. And so we will live Superhero Lena “I`ve realized what it means to be free and I didn’t want to go back to the way it used to be before”